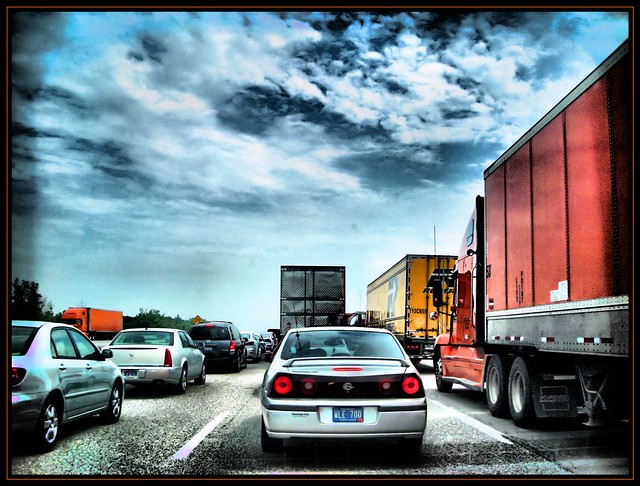 Truckers experience more frustrations than the rest of us when highways and interstates go under construction. Not only are they on the road for up to 70 hours in any given eight-day period, they’re also trying to make a living by putting in as many miles as possible. It’s important to realize that truck drivers are usually paid by the mile — not the number of hours on the job. So traffic jams and other delays hurt them financially — as well as pushed the limits of their patience.

Plus, thanks to new industry regulations that limit a trucker’s hours of service, drivers have only so much time to be on the road each week. They need to move quickly to earn the money they’re expecting to be paid for a run. Waiting in construction zones doesn’t result in take-home pay. But truckers aren’t alone in feeling the impact of traffic delays. Companies that rely on transporting goods by road also see reduced productivity from their fleets and feel the pinch, which may eventually be passed on to consumers in the form of higher prices.

Money can be a powerful motivator for people. That’s why so many companies and drivers are embracing technology that improves routing, fuel efficiency, time management and fleet tracking. Fleet management software and equipment works by a sophisticated GPS-enabled device that sits in a cab. For 70 hours a week, it tells truckers where they should drive and when to get the most mileage from their time on the road.

Keep in mind this isn’t your Wal-Mart’s GPS device. EOBRs (electronic on-board recording devices) are pro-grade systems that relay information about a truck’s location and performance to the home office, letting fleet managers know how long each delivery is taking and other metrics of the drive, including location of vehicle, use of fuel and so forth. This technology also frees up driver time by eliminating the need for drivers to maintain paper logs to record mileage, maintenance, hours of driving and breaks, and other operational details.

Perhaps most importantly for truckers trying to avoid heavy highway traffic, EOBRs can identify congestion and fuel-efficient alternate routes. This is not the same as the fastest route, which is what standard GPS systems tend to provide — if they’re updated often enough. The reality is that consumer systems frequently miss the mark entirely and lead unsuspecting drivers straight into traffic jams that suck up time and fuel.

Pro-grade GPS devices that truckers use seek for the most fuel-efficient routes. They also track the vehicle’s location and provide other performance data in real-time to improve fleet management processes. These devices aren’t required to be in every truck — yet. But a proposed Federal mandate could require EOBRs to be installed in all commercial trucks by 2016.

Part of the reason EOBRs with GPS functionality are likely to become a part of a truck’s equipment is that drivers often resort to falsifying logs (or creating a second version, often called “comic books,” to present to law enforcement officials) so they can continue to drive past the allowable 70 hours — in order to complete more miles and thus make the money they expect to be paid for a route.

The safety risks for truckers and other motorists that this habit presents are tough to overlook. The U.S. Department of Transportation reported that an estimated 34,080 people died in motor vehicle traffic crashes in 2012 — which is five times the number of U.S. citizens who’ve died in the Afghanistan and Iraq Wars to date since 2001. Fleet management software keeps records electronically, so falsifying records is impossible, ensuring drivers take breaks and minimize fatigue.

Still, to ensure truckers get the pay they’re due, this technology can help everyone win by minimizing the amount of time truckers spend in traffic, improving fuel efficiency and miles traveled and road safety, too.