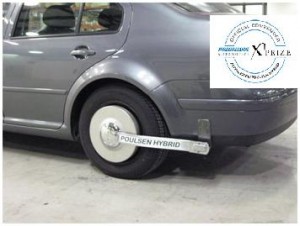 For almost $4,000.00 that is, the Poulsen Hybrid is a Power Assist Unit that is hailed as a simple bolt on upgrade for standard gas-powered or diesel vehicles. The device has caused a stir and is raising eyebrows for the device simply has the old car retro-fitted with rear DC motors, controllers, on-board charger and storage batteries. The move has the standard vechicle running using electric motors for propulsion on level roads and as with hybrids, switching to the gaspowered engine during high demand conditions like going up hills or when the battery is going flat. The system works by switching to the electric motors after the car has reached a pre-set speed say the cruising speed you select, after which the gas engine halts operation leaving the maintenance of the pre-set speed to the electric motors that gets power from the batteries.
Safety experts are quite concerned at the overall look of the vechile with parts that protrudes from the rear wheels to the trunk but the best part about the idea that makes it interesting is the fact that you don’t need a totally new car to get onto the path to green motoring. New hybrids cost a lot of money and the approach of offering a bolt-on upgrade to save a bit of the gas pump is nice. One European car manufacturer has offered an enticing approch by selling the Think and not the batteries which are kept on lease to eliminate the problems associated with maintenance of batteries which are costly and quite hazardous to the environment. The approach to upgrade existing cars is more realistic that telling a company that has a large fleet of vehicles to simply get rid of all thier cars and get newer hybrids for them to go green. Other options are just not that enticing due to huge investments and often lacking infrastructure limiting their effective range (only certain major cities have support for LPG, LNG and Ethanol Powered Vechiles)