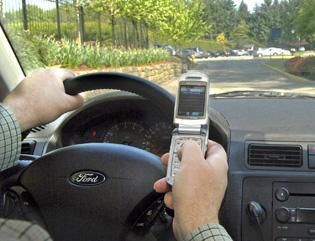 Starting Monday, city employees will be banned from sending text messages while driving in city-owned vehicles, Mayor Thomas M. Menino announced this afternoon outside the Government Center T station, which in May was the site of a train collision apparently caused by a driver occupied by his cell phone.

“We don’t want to say you should not do it when we’re not doing it ourselves,” Menino said.

Menino said he has asked the city’s Office of Labor Relations to work with unions to draft the specifics of the policy, including punishments for offenders.

I don’t know about you, but I think that offenders should be suspended. After all, no one should really be exempt from this law. Lives can be lost because of inattentiveness while driving and even if you’re driving a government vehicle, nothing changes. To be honest, I don’t really understand why this ban on texting while in a city-owned vehicle had to be highlighted. It should have been a given in the first place, don’t you think?

In any case, at least things are made clear now. I am not sure if similar measures have been enforced in other cities, but as I said above, it should be a given. Private vehicle or not, motorists should not be allowed to text while driving.